Where Dreamings Come From, Part 1: The Nature of Friendship 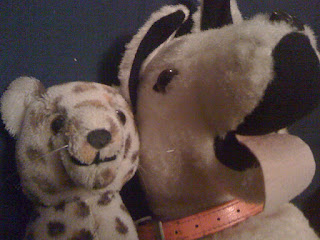 I’ve always fancied myself a stuffed animal rights activist. I remember walking past a garage sale with my sister Susie back in the mid 70’s--I was probably six or seven. A five-foot long stuffed snake dangled sadly from a clothes rack. The poor guy’s seams were splitting and the way he was negligently tossed over the rack told me he desperately needed a home. He was 25 cents.
My first stuffed animal memory involves a beanbag panda; I must have been a toddler. I brought him into the bath with me--by bath I mean laundry room sink--then watched his poor nose and mouth wash off to circle down the drain. I don’t even remember what he looked like before his tragic diving accident. Since he’d already lost some beans and sagged in this lonely, dejected way, he became the original Sad Panda. 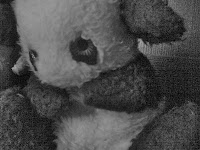 Dozens of stuffed animals found their way to the safety of my room. I arranged them comfortably on pillows and blankets. The mass of them easily covered half of my bed. Mom often wondered how I found space for myself.

When I left for school every morning, a colony of invisible gnomes would emerge from the drawer of my brother’s upper bunk and help out. They would take everyone for walks, make sure they all had food and water and would help the damaged ones I’d rescued from who-knows-where.

My stuffed-animal family was protected from danger by the gnome’s illusion powers, but in case those failed, or a villain with more powerful magic showed up in my bedroom, the guardianship fell to a two-and-a-half foot stuffed dog named Fighter. Apart from the snake, Fighter was the largest in my animal sanctuary and had a strong protective streak. You know how dogs can be.

The social interactions in my personal wildlife refuge were riddled with rivalries, jealousies, friendships and even marriages. Then, when I was around seven, my sanctuary’s social structure ran into its own Toy-Story drama with the introduction of a new resident.

My family would sometimes go to Sunday brunch at a riverside hotel in Owensboro called the Executive Inn. The ground floor of the “Big E” was built around an open floor plan, with glass elevators, ivy climbing the walls and banks of kiosk-shops built of stained wood and windows.

As I remember it, my grandmother had flown in for a visit so Mom and Dad took us all to Sunday brunch. It must have been fall or winter because I remember wearing a heavy jacket. One of the kiosks was a toy shop and sitting tall in the window was a regal looking stuffed cheetah. I must have excused myself from the table four or five times to sneak back and chat with him. My family was used to my stuffed animal obsession by this time so they tolerated my quirkiness. I'm sure I bugged my mom to buy him--that’s what kids do after all--but that’s not what I remember. I don’t remember any possessiveness or need. I felt about that cheetah the way I felt about live animals. I never believed animals were lesser than I was, or that I was in some way their owner or master. I was their equal and they were mine. Where pity had motivated me to save my garage-sale snake, and some nascent paternal instinct drew me to Sad Panda, the bond between that cheetah and me was significant right from the start, like souls from a past life meeting again. I said one final goodbye as we left the hotel, but I never forgot him. 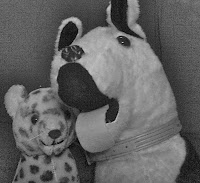 I found him perched on a stack of presents that next Christmas. My grandmother bought him for me. He had been expensive and Grandma joked that I had to keep him long enough to take to college. I promised I would. Roary quickly became the animal I played with the most, which caused some friction back at the sanctuary, as you can imagine. Luckily, as in Toy Story, Fighter and Roary would settle their differences and become the best of friends.

Years later, I would keep my promise to my grandmother. Roary sat strapped in the passenger seat of my overstuffed car all the way to college and has rarely left my side since.

Continued in Part 2: Carter Franklin and the Magic Address
Posted by Rich Howard at 11:05 AM