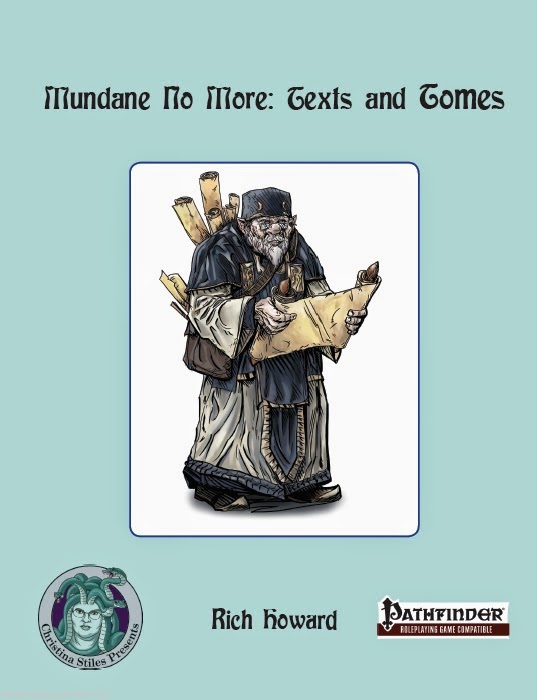 "Rich Howard’s “Mundane No More” is a glorious little pdf, one of these hidden gems that are easily overlooked, but shouldn’t be. The rules herein make bookish characters work better, make the trip to the sage more compelling and generally increase the immersion into a given fantasy world. While personally, I enjoy a more active research (with rolls), combining this pdf’s rules with Rogue Genius Games’ research rules is extremely easy. So yeah, this is one of the hidden gems, a great file and well worth 5 stars +seal of approval!" - http://endzeitgeist.com/mundane-more-texts-tomes/


Mundane No More: Texts and Tomes presents a new look at the most culturally-significant and history-altering invention in history: the book, designed by author Rich Howard.


Words. We love them. We’re gamers, after all. From novels to rule sets to textbooks to cereal boxes, non-magical language is the foundation of our imaginations. So why is it that PCs rifle through libraries in search of spellbooks and magical manuals while leaving generations of carefully cultivated knowledge strewn under their muddy boots?
Mundane No More: Texts and Tomes, remedies this by turning fantasy (and modern) libraries into treasure troves of knowledge. Mundane texts provide opportunities for any literate member of an adventuring party to retrain unwanted feats, refocus their skill ranks into areas helpful to the campaign, and to gain rare and exotic recipes for poisons, inventions, and, yes, even magic items.
Game Masters can use mundane texts to introduce plot twists, foreshadow events, patch holes in a party’s skills, and provide characters with the knowledge to confront enemies to come.
Within the pages of Mundane No More: Texts and Tomes you'll find:


● A four-tier ranking system that describes the knowledge each text contains and how your characters can benefit from it.
● A system for using tomes to retrain your character's skills, feats, spells and more, compatible with the retraining rules found in Ultimate Campaign.
● Detailed crafting-recipe rules that encourage characters to research the creation of mundane tools and weapons, alchemical preparations, and magical items as opposed to ‘knowing it all’ with a single skill rank.
● Creation rules for mundane texts.
● A dozen pre-built tomes and manuals of all types and tiers ready to drop into your campaign right now.

Don't wait - pick up a copy and add the power of the written word to your character’s arsenal!

"Mundane No More: Texts and Tomes" for the Pathfinder RPG by Paizo﻿ garners not one, but two 5-Star reviews! Reviews take time and considerable effort, so I greatly appreciate the detail and kind words these reviewers offer.

"...a beautiful concept that feels like it should have been in the rules all along. While the alternate rules for crafting new books adds a layer of complexity, it does so in such a way as to turn books into prized possessions; each with a potential story behind it..."

"This covers anything from a city guide to a bardic epic or a treatise on the mechanics of locks... or indeed any subject you care to consider, and means that any book a character picks up is potentially useful."
Posted by Rich Howard at 8:47 AM