My mom loves the Super Bowl. Well, she loves the commercials. This year one of them reminded her of me.

When I was a kid I had a beagle named Sarge. Like me, Sarge loved his friends. He would come home with a pack of his buddies from around the neighborhood (I use the word neighborhood loosely, since we lived on several acres). They were a rag-tag bunch of strays and locals, all playing and causing mischief. I loved those guys. One day Sarge had collected a new addition, a young doberman puppy, still bandaged on her ears, tail and feet from where she'd been trimmed at the vet. Her tag said her name was Bailey.

For the next few months Bailey became a part of Sarge's family, but after Sarge died, the pack broke up and I stopped seeing them.

A couple years later my family was having a Fourth of July party. We had a pool, BBQ pit, woods to play in and a lake for fishing. It was the perfect spot for family parties. Mid-afternoon the laughter around the pool stopped suddenly, and I heard my sister yell out to my five-year-old niece to "get away!" I looked up and saw a doberman on the lawn a few feet from the crowd. Dobermans in the 80's were treated like pit bulls are today, or rottweillers were in the 90's, so everyone freaked out.

The dobbie saw me and started wagging her stub of a tail like a blender.

"Bailey?" I asked. The last time I'd seen her she couldn't have been more than 9 months old so I couldn't be sure it was her.

She ran right to me.

"Of course," my brother said, "Rich knows every animal in the neighborhood by name."

I never knew where Bailey lived and never met her owners. I'd come home from school and whistle our special whistle and she'd come running from somewhere around the lake. We'd explore the woods behind the house, wrestle and sit under the deck watching the rain fall on the water.

In 1987 my parents moved to California. I came back to Kentucky to finish my senior year but didn't get out to the old house much. I missed Bailey but knew she had a good home--she was always well fed and in great shape so someone was taking good care of her.

In 1990 I flew back for a visit and went out to see the old house. I knocked on the door to get permission to look around, but no one answered. Since the house sits on 2+ acres, I decided to wander around anyway. In a fit of nostalgia I whistled our special whistle and waited for Bailey to come sprinting around the lake. After several minutes, she hadn't come. Maybe her family had moved like I had. I wandered some more and whistled again a few minutes later. Nothing. She would have been near nine-years-old and there was no guarantee she was even alive. I tried not to think about it. Besides, I'd trespassed long enough.

As I turned to walk back up the hill, I saw Bailey tearing around the lake toward me. I couldn't believe it. She knocked me to the ground and I couldn't stop her from licking me all over the face. We wrestled until we were exhausted then just lay on the grass together and watched the sun on the lake while I rubbed her belly. A few minutes later a tall, bearded guy in a baseball cap appeared from the direction of the house.

"We're old friends. I used to live here and we played together a lot. I'm sorry for trespassing, I just wanted to see the old place."

I looked at him, confused.

"I live down the road. Bailey's my dog."

"You used to play together?"

"Twenty minutes ago she was sleeping in the living room, then she went crazy. I couldn't figure out what was going on. I've never seen her do that. Before I could calm her down, she broke through my storm door and took off."

He'd been walking around the lake for fifteen minutes trying to find her. I felt terrible. Okay, not terrible; Bailey had missed me as much as I'd missed her. I did feel bad for the poor guy, though, and offered to pay for the door. He smiled and politely told me not to worry about it. He asked me to send Bailey home when we were done visiting, then left. We spent another half hour together then I had to say goodbye.

It would be two years before I would get home again. That time, she didn't come.

I like to think that Sarge was there to greet her when she crossed over, surrounded by a pack of new friends he'd picked up on his travels. I imagine them wrestling and playing like the old days, and she can assure him that she took good care of me while he was gone. Just until I was old enough to be on my own. 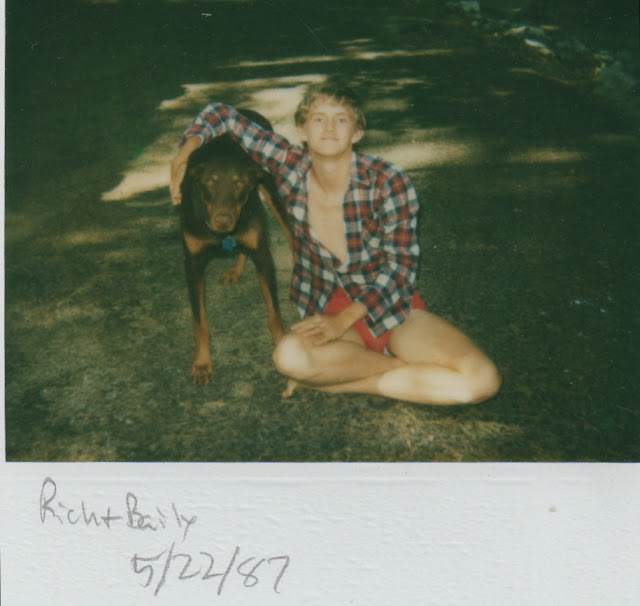