For the past year, I've been finally fulfilling my dream to become a game designer. Publisher, editor and designer Christina Stiles has been kind enough to take me under her wing and get me involved in a number of projects I'm incredibly excited about, and many of them are releasing soon. You can already pick up my first professional editing piece, Xaolings, in PDF.


Two series I've become heavily involved in are titled "Bite Me" and "Strange Brew", both for Pathfinder. "Bite Me" currently focuses on putting lycanthropes into your game alongside player-characters, but will expand to other supernatural creatures like vampires. The large "Pathfinder Guide to Lycanthropes" will be releasing in its entirety later this year, but several PDF products have come out already: "Playing Lycanthropes" and "Wereblooded". Another product, "Skindancers", is in final layout and will be releasing within a few weeks.

"Playing Lycanthropes" and "Skindancers" were written by two-time ENnie-nominee, Robert H. Hudson Jr., with both contributions and editing by yours truly.

The second series, "Strange Brew", will be presenting the Pathfinder witch class in a whole new light. Christina Stiles, alongside author and gaming-witch-expert, Timothy Brannen, have put together hundreds of pages of new material on the witch, including multiple class variations, archetypes, hundreds of spells, feats, new hexes and, my favorite, background information on covens, traditions, and cultures from around the world. I was honored to be included in the editing and review process of this book, but recently I've been tagged in to help Tim and Rob Hudson with an eerie and awesome new warlock class. It's an honor and a pleasure working with Tim and Rob; there is nothing like collaborating with a creative and supportive team on a game we all love.

Until June 11th, 2014, you can be a part of making this awesome book a reality by linking over to our Kickstarter and donating. The $25 and $35 contributions get you PDF copies of Ultimate Witch along with some awesome bonus material, including The Talented Witch by Owen Stephens.

The second series in the Strange Brew line will be a project I've been waiting a decade to write: "The Ultimate Shaman". US will present a brand new shaman class, variants and archetypes for existing classes, new spells, new magic items, a new totem system (including elemental, ancestor and plant totems along with the more-familiar animal totems), exploring shamanism from around the world, planar travel, and much, much more. "Ultimate Shaman" is slatted to be Kickstarted later this year. If you follow the "Ultimate Witch and Warlock" Kickstarter, I'm sure we'll email more info from there. Of course I'll be keeping you informed as well.

Don't want to wait another six months for a product written by me? Two more projects with me on the cover will be releasing very soon. 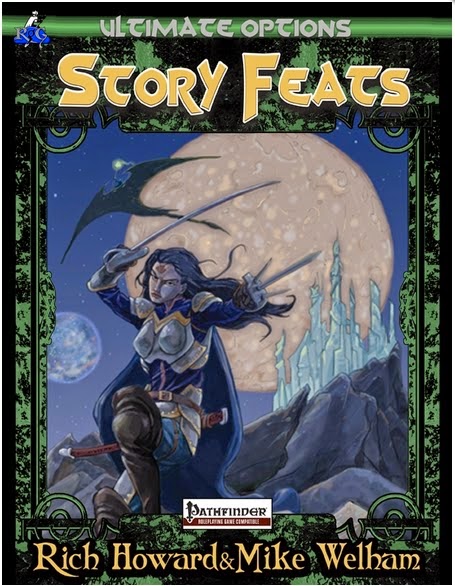 The first is called "Story Feats" and it was co-written with 2012 Paizo Superstar, Mike Welham. Story feats were first introduced in Paizo's Ultimate Campaign and give players and GMs a cool way to fold character backgrounds into the game. Owen Stephens from Rogue Genius Games and Paizo decided the only issue with story feats was that there weren't enough, so Mike and I created over 50 new story seeds for your game! This is a product I'm incredibly proud of and as a bonus, "Story Feats" will be available as POD (Print on Demand), meaning you can get a print copy for your shelf. (Including free signature from me the next time I see you.)

[ADDENDUM: "Story Feats" is available from www.paizo.com and has drawn three 5-Star reviews, including one from storied reviewer, Endzeitgeist.]

The second upcoming piece will be from Christina Stiles and is called "Mundane No More: Texts & Tomes". In T&T, I present new rules for adding non-magical texts into your game. Whether you're running a low-magic campaign, a modern d20 game, or simply want the hundreds of books in your villain's lair to mean something, "Texts & Tomes" presents all the information you need. T&T is currently in layout and I'll have more information on a release date soon. I don't know if it will also be available in POD format yet, but will let you know.

T&T was the first professional gaming pitch I ever made and it will be the first product released with me as the sole author. It will be an incredible accomplishment in my life to have contributed work I'm so proud of to a game I love so much.

[ADDENDUM: "Mundane No More: Texts and Tomes" released on July 4th, has garnered two 5-Star reviews! Link over and check it out.]


I found a seat in the corner of the Sniffling Griffon’s common room and hung my saddlebags over the chair-back. The sun had only just risen so the inn’s other occupants were the snoring, ale-covered casualties from the previous night, plus Frail, the Griffon’s serving boy. Since no one else was either conscious or literate, I slipped the tome from my bag.
Enough light sifted through the soot-covered window for me to see the rough scales that my fingers had first caressed in that half-burned temple. The spine of the ancient text cracked as I lifted the iridescent dragonhide cover—not because the binding was new, but because no one else had openned it for close to a century.
Frail leaned his broom against the wall when he noticed I wasn’t in a drunken stupor. “I’m sorry, Sir Ascalon. I didn’t see you come in. Would you like some breakfast? We have a lovely stew left over. It’s best the next day.”
“Not stew.” The illuminations shimmered at the touch of broken sunlight. I couldn’t risk damaging what I spent so long to find. “Ale,” I said as I carefully turned the pages. “In a lidded stein. Bread and cheese.” I barely registered the boy’s tiny frame retreat into the kitchen.
The precise hand that had copied the text could only do so much to improve the readability. It’s said that a Bel-Alian chirurgeon recorded the first notes while watching his charges, the knights of the Draconic Crusades, on the battlefield. The anatomical details and weapon diagrams alone made it worth a fortune. Still, the real value lay in the pages of strategy and tactics. The Lord Commander of His Emperor’s Army had not only defended Bel-Alial from the Schwarzwurm’s horde, he had killed the beast’s last children. The chirurgeon had sat at the Lord Commander’s side for years and understood far more than his charges could imagine.
The ale-stein thudded on the table before I noticed Frail had returned.
“Pardon my asking, Sir, but is that a book?”
I eyed him over the text.
“I’m sorry, Sir. I just don’t see them often and I’ve never seen one so…well, grand, if you don’t mind me sayin’. All we mostly get here are farmers and soldier types, and they ain’t much for readin’.”
I slid my dagger from my sword belt and skewered a hunk of the mold-studded cheese.
“I didn’t mean to insult. You’re an educated man, I’m sure. It’s just, Master Stefan says readin’ is only good for bards and finger-wagglers and not much of use to common folk.”
The Rampages in the north hadn’t made it this far south, though small groups of refugees had managed to make it to the coast. The Crusades were supposed to have rid the world of dragons, but for nearly a year wyrms and dragonkin torched Ariel, from the white cliffs of Northkost to hills of Friemount. It had been so long since anyone had fought a dragon the tactics had been lost to time. But now, with this, I could resurrect the Lord Commander’s Order of the Wyrm and lead our people to victory.
“Master Stefan has it backwards, Frail. It isn’t magic that makes the words worthy. It’s the words that make life magic.”